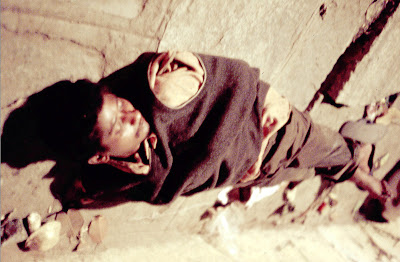 Beginning of the year 2005. I was visiting the great city of Bangalore, South of India, one week after the tsunami disaster in Southeast Asia. The day after the catastrophe, when I was still in the Vicente Ferrer Foundation in Anantapur, the Spanish embassy called me by phone to know if I was safe and sound. What a strange irony! Your country cares for you in the most unexpected situations and you believe, for a moment, you are important for them. The duty officer informed me that it would be safer to leave the country and return to Spain. Certainly I didn’t want to continue my tourist route. It would be immoral if I continued enjoying my hollydays after thousands of people had lost their lives at less than 150 kilometers from where I was. My journey had been truncated with the disaster drama. But I didn’t want to come back to Spain… Why? I was in India and I should continue staying there…

I had in mind these thoughts while I was walking across the Cubon Park. Suddenly the voice of a man pulled me out from my self-absorption. Stunned I noticed that, close to me, had stopped a humble Indian on his fifties who seemed to require my attention; automatically I introduced my hand into my pocket looking for some coins, thinking he was a beggar. The man moved his head, according to the undefined and unmistakable Indian style, and I understood immediately I should really be putting my money back. Anthony, this was his name, just wanted to talk, he had a very serious problem and he needed to tell it. That was the way he blurted out his words, without any circumlocutions, with an astonishing and unusual frankness. At first I scrutinized Anthony with distrust, but I relaxed right away. Someone had just made me the most honest request I had heard in a long time, and I was touched by this proposition.

Anthony had spent several days sleeping in the train station. Obviously he hadn’t rested for a long time: he had red eyes and was exhausted; the bustle of noisy India, the continuous activity from passengers coming and going, the repetitive loudspeaker informations about train’s arrivals and departures, prevented Anthony from sleeping. We’re walking in the middle of a great avenue with ancient trees, while Anthony was explaining me these details from his hard everyday. We arrived in front of the Mahatma Gandhi statue, near of the north gate of the park, and there we sat down. The sun was setting, the overwhelming hot of the day had decreased. I said to Anthony that I invited him to drink or eat something.

But Anthony refused grateful my offer, he just needed to be heard and continued telling his story. He had left Pondicherry one week ago, traveling more than 300 kilometers on foot. In Bangalore someone had promised him a job in a textile factory. But when he arrives, he read in the newspapers that a big wave had razed the south coast, where his family lived. Anthony could not contact his wife, they were very poor and had no mobile or home phone.

He was desperate, he did not know if his loved ones had survived the catastrophe. He wanted come back to Pondicherry, but he had not money for the journey or anyone who ask for help. Anthony was alone in unfamiliar territory.

For a couple of hours we kept talking under the watchful eye of Gandhi’s statue. Anthony spoke to me at length about his family: his 17 year old son wanted to study computer engineering, he was who had taught Anthony his basic English. His beautiful daughter 12 years old, very naughty and flirty, dreamed of becoming a famous Bollywood actress. When Anthony started to talk about his wife, his speech became impassioned and melancholy at the same time. They had married very young in one of the many concerted Indian weddings. Very proud Anthony told me he loved her deeply, even though others had chosen for him to his own wife.

At the end I offered to pay his train ticket back to Pondicherry. I remember vividly how Anthony looked at me with his big black eyes, bloodshot and tired, but sparkling and full of life. I took out from my wallet 200 rupees (less than 3 euros) and delivered him. Anthony accepted thrilled. Now this money was no longer for him an alms, but a loan from a stranger in an emergency situation. He hugged me strongly, promising refund my money, and he asked me to write my address in Barcelona for the transfer. I said it was not necessary, these few rupees were a gift.

The story that Anthony told me in the Cubbon Park in Bangalore the afternoon of January 2, 2005 is the story that has inspired the screenplay of “Indian Way”. In 2012 I came back to India. I looked for Anthony in Pondicherry, but the address indications were ambiguous and never again I heard from him or about the denouement of his drama befallen eight years ago.

The last memory I have from Anthony is his image in the middle of the crowd of a busy street in Bangalore, going with haste in direction to the train station, waving at me from a distance, happy, excited, full of hope.